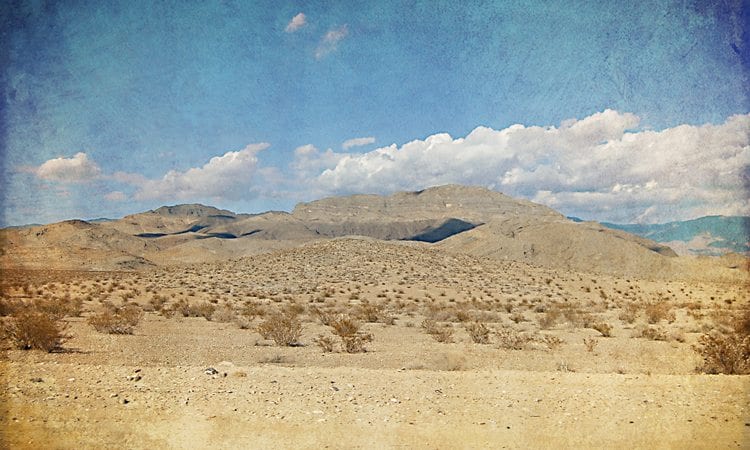 When you think of Death Valley California and it’s likely that a few common images probably come to mind; dry river beds, cloudless skies, searing heat radiating off barren rocky landscapes… but I’d guess you didn’t imagine yourself in a classic car navigating twists and turns with a cool, confident smile on your face and not a drop of sweat in sight. Death Valley is a place where the ground temperature can reach more than a 145 degrees… and that’s on a mild day. Staying cool in such a place is major challenge that few people would think is possible. Car manufacturers bring their prototypes here to test because one day of testing in the valley is equivalent to three weeks of average day-to-day commuting. If a car can survive here, it can survive anywhere.

Restomod Air manufacturers the best Custom A/C systems in the world… so when the question arose whether our systems are good enough to tackle the most extreme temperatures found on the planet (not just the average daily commute in 90+ temperatures), we just had to develop the ultimate test… just how good could we do?

To answer this challenge we decided to take it on with one of the most sought after and popular musclecars ever built… a 1969 Chevrolet Camaro. We were after real world results with a real world car. So the stage is set…. Death Valley California, the hottest on Earth – versus our restomod 1969 Camaro. It’s either beat the heat, or we’d go home crying. 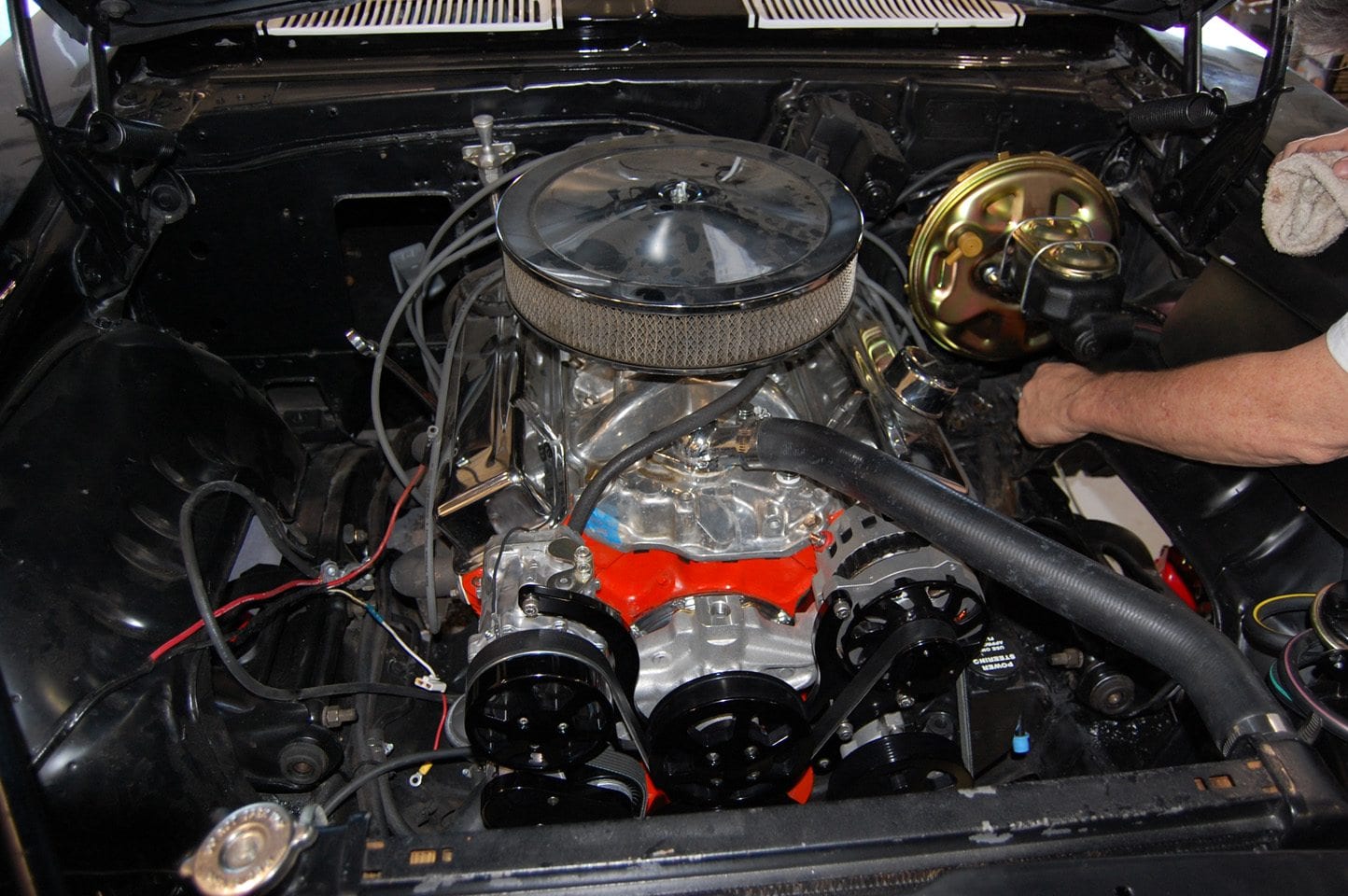 With the challenge set and a target date in August (the hottest month of the year)… the build began earlier this year. First we found our 1969 Camaro at a local restoration company, Atlas Musclecars, and drove it our warehouse. The car was in pretty good shape and certainly didn’t need any body work – which saved us lots of time. But as it we purchased, it was under powered and the A/C could barely handle a mild day in Texas. First order of the build was to get into the right mind set, so a set of custom plates with the words “Fncold” was acquired. You won’t need a dictionary to know what we meant by that…

We were absolutely determined that this would be not be a trailer queen… nope, we intend to drive the daylights out of it when it’s done, and we also wanted to do the majority of the work ourselves. We’re not afraid to turn some wrenches.

The guys at MasterPower Brakes almost busted down our door to get involved, so we installed front and rear disc brake kits from their Legend brake line. All that extra stopping power was great when the occasional lizard darted across the road in the valley.

A high priority was being to able to navigate the twisty roads in the valley with confidence, while also having an aggressive stance that showed that our Camaro truly meant business… so the good guys at Ridetech set as up in grand fashion. The coil over suspension setup (with a 4-link set-up in the rear) from Ridetech was an easy install and improved the Camaro’s handling more than we’d ever be able to relate here. And yes, there are curvy roads in Texas too, so the new suspension is sure to get a lot of workouts.

Even though a crate motor from Chevrolet Performance was sourced (a great choice for dependability and power), we couldn’t resist adding some select parts from Crane Cams. A high-performance cam and roller rockers was added and the difference was immediate.

To keep our new ride cool (regardless of the extreme temperatures) we turned to SPAL fans for predictible airflow across our new Vista Pro Automotive radiator. With products from these two great companies working together our temperature gauge never moved a tick off above 190 degrees… even with just water (no antifreeze) in our cooling system (we do recommend a mix of 50/50 water antifreeze).

All this hardware was surrounding the key to winning this challenge… a dual A/C system (using off-the-shelf components available to anyone). One A/C system was dedicated to cooling the cars interior, the other dedicated to our innovative air conditioned seats…. but more on that coming up… 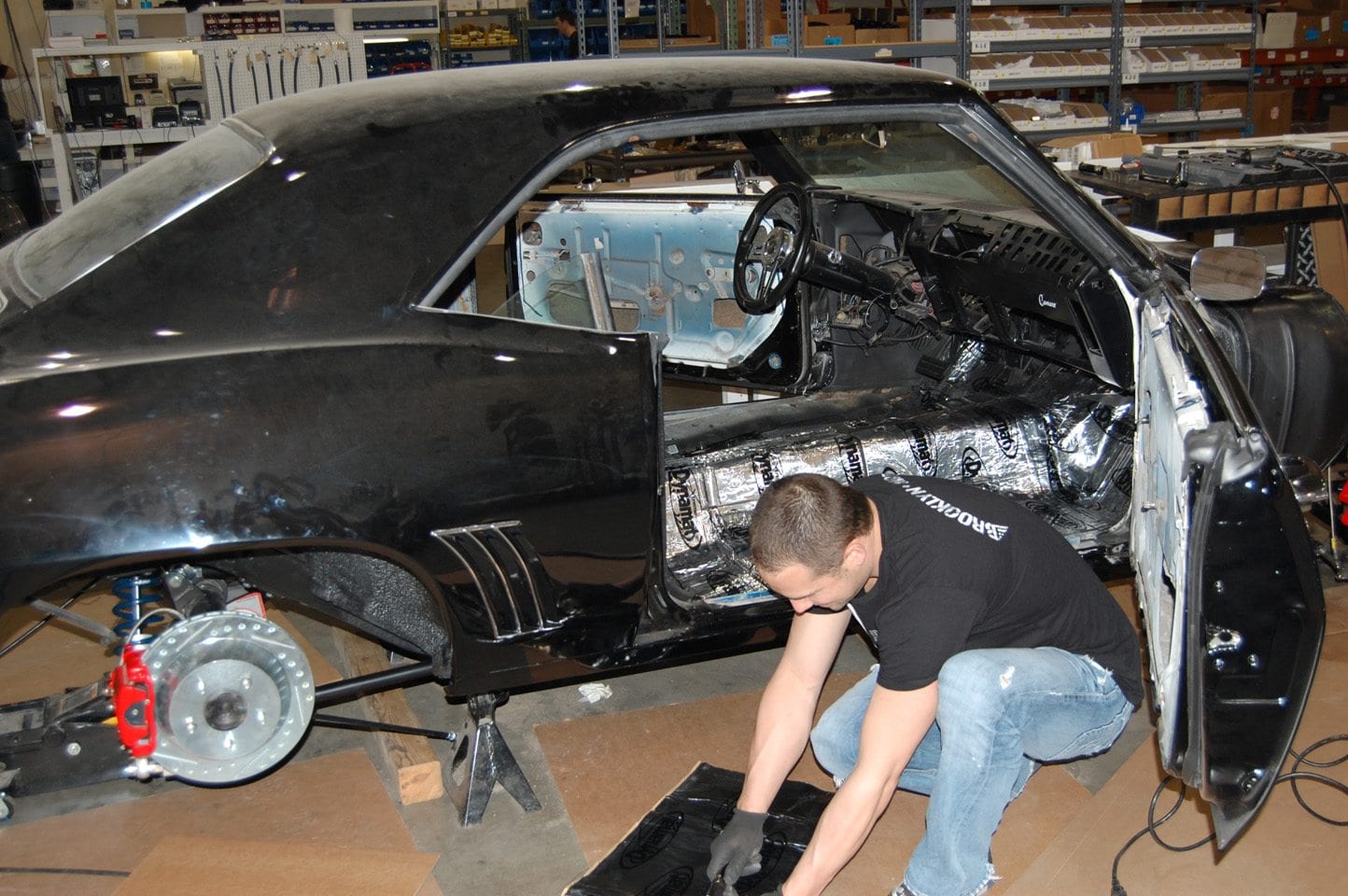 What would a restomod classic be without some creature comforts inside to compliment all our massive A/C power. So when we turned our attention to the interior it was sky the limit….

We began by stripping the car of all the old carpet, insulation, and seating. The floor pans were cleaned and coated with POR 15 to seal out any moisture. Because one of the key elements to keeping the interior cool was keeping heat out and cool in… in came Dynamat with their awesome Dynamat and the new Dynaliner. The pre-cut Camaro kit of Dynamat covered all the main areas and keeps out unwanted vibrations and sounds. We then covered every inch (including the roof and the inside the doors) with the new Dynaliner – a great new product to insulate against heat transfer into the inside of the vehicle. Several thicknesses were used, and we estimate that we covered close to 95% of the interior panels with this new material.

Dakota Digital was as excited as we were on this build, and really came thru with custom dash gauges and easy integrated controls. We even used their fan controllers… one of the easiest and most effective components we installed. Dakota Digital really knows their stuff.

Eddie Motorsports topped off the entire build with billet goodies like taillight bezels, door sills, awesome hood hinges, and other small touches that only Eddie could dream up.

To keep all the power and cool design on the ground we went with the coolest wheels on the planet… BOZE wheels . They helped us from day one with recommendations on wheel size and width. Perhaps the coolest thing about BOZE is their custom finish system that let us style our wheels to truly compliment our Camaro. The folks at BOZE know wheels… and cars.

That pretty much wraps up the build. One the best things about it was the help we got, both from within the company (pretty much everyone got to help, even the VP’s wife), and from friends in the industry. It was a lot of fun to install some cool parts and really put our many, many years of A/C knowledge to use. With the car complete, all that was left to get to Death Valley before the end of August…. 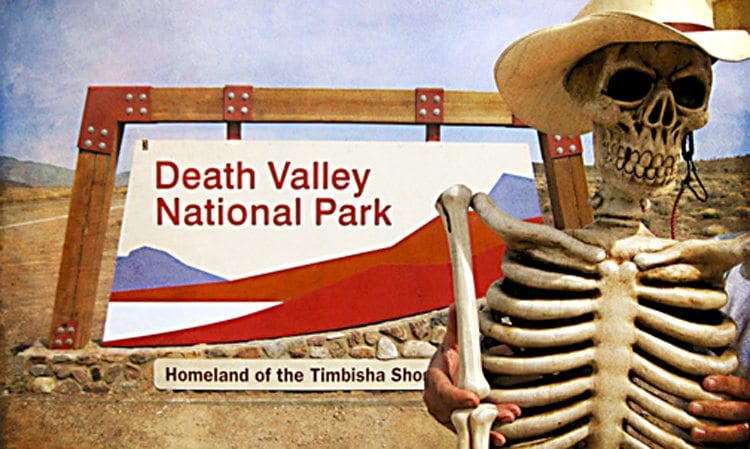 As much as we trusted the car, we just couldn’t see ourselves driving it cross country on a brand new engine and taking the chance that some sleepy eyed truck driver might cross a line and ruin a classic in a second… so we borrowed a trailer from a friend and packed our bags. The 1500+ trip from Texas would take us thru several states, past tourist traps and steak houses, thru storms and clear skies and long stretches of road in the early hours, thru cities known for gambling and glitz, and then finally serene landscapes to what looked like an endless desert. Along the way we bought lots of gas, ate lots of fast food, and discovered that satellite radio is really a sanity saver. We only had to replace one flat tire and our intrepid driver didn’t get even one ticket. And the temptation to take the Camaro out of the trailer only overcame us a few times. Death Valley and the Longstreet Casino Hotel greeted us on the end of the drive with a near deserted game room and the world’s largest dairy cow (yep, there was Herman… a female dairy cow the size of Volkswagen). Our first day in the desert was one of cloudy skies and cooler than normal temperatures…. But that was just day one…

The Actual Challenge in the Valley…

Death Valley might have been mild and cloudy when we arrived, but on day two it didn’t disappoint us… the sun was out, the heat sneaked across the flats in the morning and by noon was strangling us just like we expected. The ground temperature was 149 degrees… and that was on white sand. We drove the Camaro into the heart of Death Valley in search of a good place to perform the actual test. We parked the Camaro in the sun and ducked into the shade to let the interior reach inhospitable temperatures. Within 30 minutes the black paint of our Camaro was so hot our digital thermometer could register it. Our mini dash thermometer got angry at us and turned completely dark… the LCD just couldn’t take the punishment. So, the heat was on.

We waited about an hour. We watched several prototype cars whiz on the down the roads, masked by crumpled body wrap paper and plastic mesh, and entertained tourist and locals with our reasoning for parking a black car out in the searing sun with the windows up. Just some crazy company from Texas trying to see how hot thing can get… surely that happens here every day? Now was the time to put our cards on the table and see just what our A/C systems are made of. With a writer on-hand from Chevy High Performance magazine to document the actual challenge, keep us honest, and write up the results for an upcoming issue (no matter what happened), we finally cranked up the Camaro and it’s dual A/C systems….

So that’s it in a nutshell. The proof is in the numbers, and the numbers don’t lie. The desert was beautiful, hot, dry and a wonderful experience. The people were friendly, the skies clear, the roads fast, and the air in the Camaro was cool and comfortable. We love challenges like this. It was great to build a car, take it to place where we could test our A/C systems true capabilities, and come back a winner. It was really our chance to prove that our passion for A/C is paying off for each and every customer that installs one of our systems.

We can’t wait until next year…