Striving to push the envelope, Restomod Air has redefined history and repeated the ambition and innovation of its ancestors.

Air Conditioning has been a creature comfort in modern cars that many of us take for granted. Many of the younger generation of today won’t remember fresh air intakes, convertible tops that open a car up for fresh air or rolling down the windows on a hot summer day. In fact, outside of some limousine companies in the 1930s, automotive air conditioning was a benefit for the super-rich. 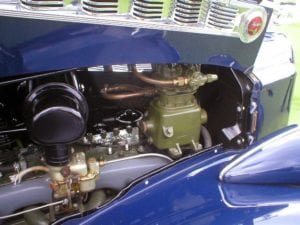 The first company to offer a car with factory installed air conditioning was the Packard Motor Company in their 1939-1940 production lines. Manufactured by the Bishop and Babcock Co., these “weather conditioner” units offered heat and was installed in the trunk space of the vehicle. Though marketed well and fully warranted by Packard, the units were not incredibly popular. Reasons for this unpopularity included its size (took up most of the trunk), its controlability (no shut-off or thermostat)  and its price (which in today’s currency would be over $4k). Due to this inherent unpopularity, the costly addition was dropped from production after 1941. 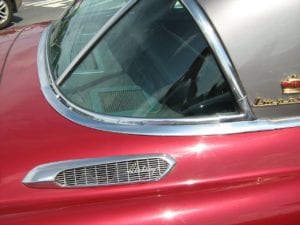 Although air conditioning was offered by Cadillac in 1941, the next major development in automotive air conditioning occurred in 1953 by the Chrysler Corporation. Put into production with the Chrysler Imperial and titled the “Chrysler Airtemp,” this innovative air conditioning design was operated by a single switch on the dash, with a low–medium-high setting. Capable of removing humidity, pollen and tobacco smoke, the Airtemp had the highest cooling capacity and was    the most advanced system of its time. Another benefit to the Airtemp was its use of outside air to freshen the “staleness” associated with most air conditioning of the time. Cadillac, Buick and Oldsmobile also added more a/c options in the 50s, including the use of Frigidaire systems that utilized separate engine and trunk units

Air conditioning, as we know it today, is based on the design produced by Nash in 1954. The Nash Ambassador was the first auto to have a front end, fully integrated heated and ventilated ac system. This system was also the first to use full dash controls, and electric clutch and an easily serviceable unit.Nash’s system not only revolutionized air conditioning, but also beat all other systems in price, costing only $345 at that time. The layout pioneered by Nash became the standard to which all other a/c was measured, and continues to influence both the OEM and Aftermarket world. 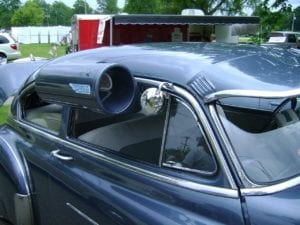 As the Aftermarket world of air conditioning developed, systems of all shapes and sizes were produced. From bazooka shaped car coolers like Thermador, to the blocky units of aftermarket companies that have come and gone, air conditioning has gone through some serious changes. Companies like Classic Auto Air and Vintage Air broke the mold in the late 70s with various model specific kits. As technology and engineering capabilities have increased, both companies grew and are now the big dogs of the Aftermarket A/C industry. Other companies such as Old Air have also come up during the 80s and 90s.

However, in 2012, a new dog walked on the scene. Sleeker, Faster and Stronger than any of its predecessors, this Pit-bull of the a/c world has taken aftermarket air conditioning into a new dimension. Welcome to world of custom a/c. Welcome to Restomod Air. Offering a variety of vents, controls, bulkheads and a/c units that are fully customizable, Restomod Air has become tired of seeing beautifully built muscle cars, hot rods and vintage rides with cheap, plastic and ugly looking a/c systems. Striving to push the envelope, Restomod Air has redefined history and repeated the ambition and innovation of its ancestors. Here at Restomod Air, breaking the mold and rocking a kick-ass attitude is second nature. As of 2015, no other company has stepped forward to match the quality, the culture and the attitude of Restomod Air.

Restomod Air –the only Aftermarket A/C in the world with Ultimate Style and Killer Performance.

Does your wife ever tell you she is cold? Ever nee